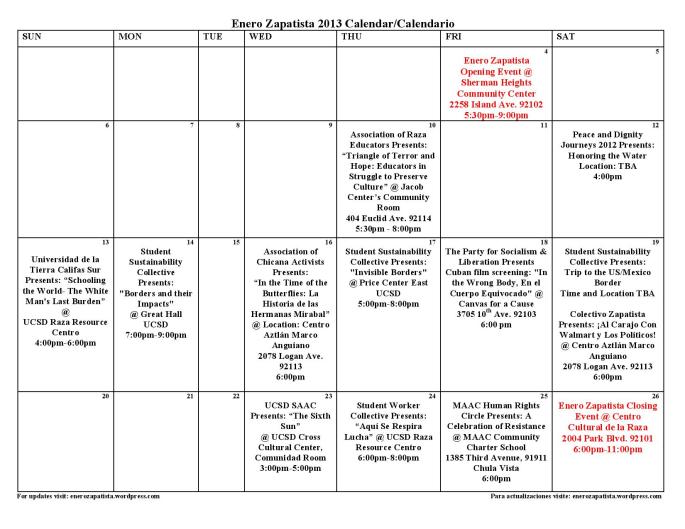 Join us for the first event of Enero Zapatista. The event will open with the film screening of “The Fourth World War,” a documentary that portrays movements resisting globalization around the world. The film looks at popular struggles in Argentina, South Africa, Korea, Palestine, and their relation to Zapatismo in Chiapas. There will be a discussion and speakers after the film. Food will also be provided. Sherman Heights Community Center 2258 Island Ave. San Diego 92102 from 5:30pm-9:30pm.

January 10 “Triangle of Terror and Hope: Educators in Struggle to Preserve Culture” presented by Association of Raza Educators (ARE)

ARE will present a political education on the connections between the struggles for cultural preservation in educational spaces. This presentation will specifically look at the Zapatista autonomous schools in southern México, the attack on Arizona’s Mexican-American Studies program and the local struggle for self-determination. Jacob’s Center-Community Room 404 Euclid Ave. San Diego, CA 92114 from 5:30pm-8:00pm. For more info email:aresandiego@yahoo.com

Peace and Dignity Journeys occur every four years and start with indigenous runners in opposite ends of the continents (Chickaloon, Alaska and Tierra del Fuego, Argentina). They run for six months through hundreds of indigenous communities where they participate in their respective spiritual practices and traditions; spark dialogue on the issue of peace and dignity for Indigenous Peoples; model their responsibility to Mother Earth, Father Sky, communities, and themselves; and receive the community’s prayers. These prayers are conversations and are then carried to proceeding communities until the runners reach the center of the hemisphere. Join us January 12, 2013 at 4:00pm to listen to the story of the runners who carried these prayers in honor of the water. Location to be announced. For updates please visit our Facebook: facebook.com/groups/pdj2012/ or contact Karinna at (619) 816-0133

UniTierra Califas Sur is a temporary autonomous zone of knowledge production aimed at creating spaces of convivial learning, using zapatismo and horizontal discussions in conjunction with Universidad de la Tierra in Oaxaca, Chiapas, San Jose, and Los Angeles. This film will discuss the concept of “education” as a colonial system vs. communal learning. There will be a dialogue after the film. UCSD Raza Resource Centro 9500 Gilman Dr. 92093 from 4:00pm-6:00pm. Contact Leslie Quintanilla: ljquinta@gmail.com for more info.

January 14 “Borders and their Impacts” presented by Student Sustainability Collective

A speakers panel will focus on: how borders become recognized and who legitimizes borders between nations, the environmental consequences of borders with an emphasis on the US/Mexico Border, and a case study on Palestine and the ways in which the wall/border there affects indigenous communities. Speakers include: José Fusté and Lila Sharif. Great Hall UCSD 9500 Gilman Dr. 92093 from 7:00pm-9:00pm.

January 16 “In the Time of the Butterflies: La Historia de las Hermanas Mirabal” presented by Association of Chicana Activists (A.Ch.A)

This is an evening in which Association of Chicana Activists will screen the movie “In the Time of the Butterflies” to learn and discuss about a true story that took part in the 1940s and 50s. The three young Mirabal sisters compromised themselves to fight against Rafael Trujillo’s dictatorship of the Dominican Republic government. Their revolution sets a great change in the lives of the Dominican people to find justice and hope for a nation’s future. [The film is in English with Spanish subtitles]. Location: Centro Aztlán Marco Anguiano 2078 Logan Ave. San Diego at 6:00pm.

Student Sustainability Collective invites you to a talk about how and why “ghettos” get constructed within cities, and what borders exist between urban and suburban areas within cities. Price Center East UCSD 9500 Gilman Dr. 92093 from 5:00pm-8:00pm.

January 18 “In the Wrong Body, En el Cuerpo Equivocado” presented by The Party for Socialism & Liberation

A new landmark film from Cuba “In the Wrong Body” (“En el Cuerpo Equivocado”), produced in 2010, in Spanish with English subtitles, was directed by Marilyn Solaya.The film tells the moving story of Mavi Susel, the first transgender person in Cuba to receive a sex reassignment operation, in 1988.This unique film documents the personal struggle of Cuban Mavi Susel for full gender expression through sex reassignment surgery. It also provides a broader picture of the education and development of a scientific understanding of homophobia and its history, and the application of principles of true equality and democracy in socialist Cuba. Canvas for a Cause 3705 10th Ave. Top Floor, 92103 San Diego, CA at 6:00pm. For More Info: sandiego@pslweb.org

The Student Sustainability Collective invites you to a trip to the US/Mexico Border, with a professor, to physically see the impacts of the wall between the U.S. and Mexico. Location and time to be announced.

The Student Affirmative Action Committee (SAAC) invites you to the film screening and dialogue of the “The Sixth Sun,” a film that examines the events during and following the Zapatista upraising in Chiapas in 1994. Location: Cross-Cultural Center, Comunidad Room at UCSD 9500 Gilman Dr. 92093 from 3:00pm-5:00pm. For more information contact: makamil@gmail.com or jennifermaldon@gmail.com

“We see the beautiful homes. The hedges are trimmed, the gardens are perfect, but who maintains all this? Who looks after it? And do we treat the workers with the dignity they deserve?” Ramiro Gomez, an artist and nanny will be discussing and presenting some of his artwork of life-size cardboard cutouts of nannies, gardeners, and housekeepers. He strategically places his art around the affluent areas of Los Angeles in efforts to make visible the labor of Latin@ workers that is often taken for granted and made invisible. UCSD Raza Resource Centro 9500 Gilman Dr, San Diego, 92093 from 6:00pm-8:00pm. 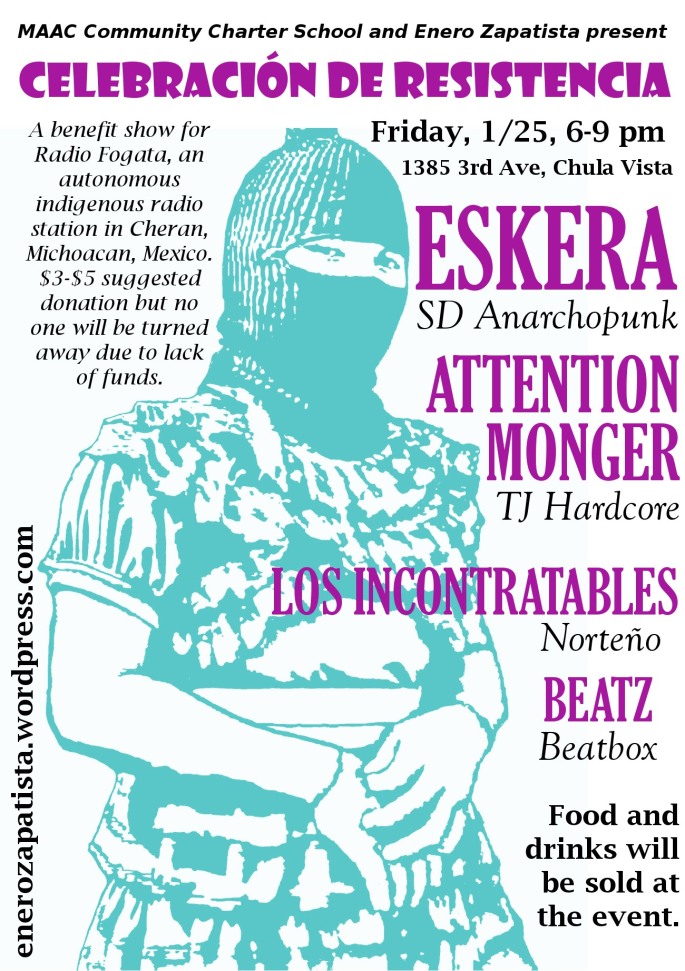 This is the last event of Enero Zapatista. There will be Art, Food (veggie taquiza), Vendors, and performances by Olmeca, Mujeres En Resistencia, Cihuatl Ce, and more! Come join us for this celebration. Centro Cultural de la Raza 2004 Park Blvd 92101 from 6:00pm-11:00pm. 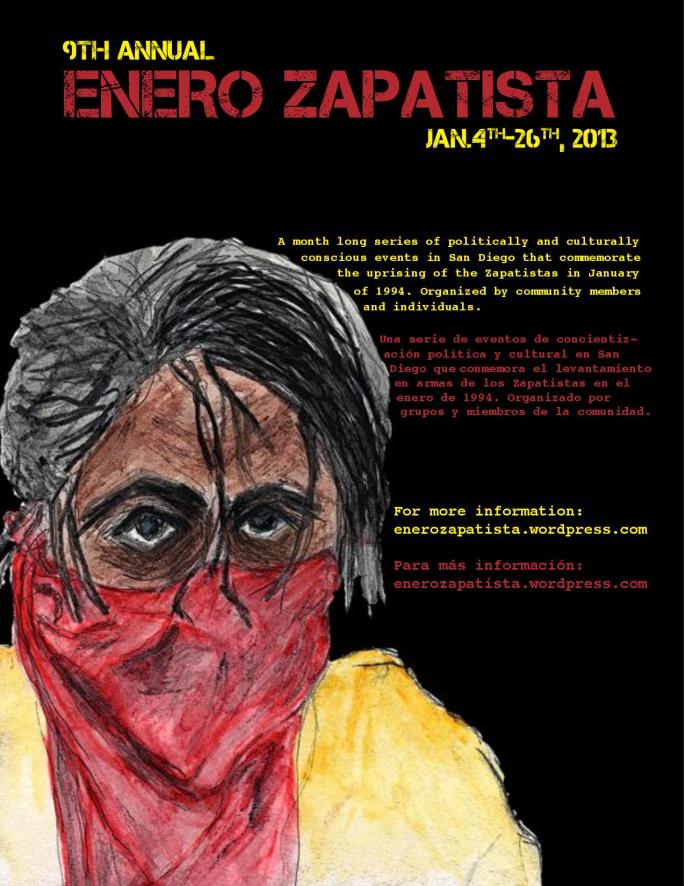